Are You 21 years of age or older?
Yes
No 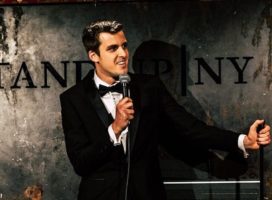 Our Town Brewery presents a night of stand-up comedy from some of the best and funniest comedians from NYC. Comics from the tour have been on Comedy Central, MTV, SiriusXM, and have their own hour specials.

In November of 2020, he released his debut hour comedy special “Bret Raybould Retires From Comedy.” The accompanying comedy album version of it debuted at #1 on the iTunes comedy charts and had its worldwide premiere on SiriusXM’s premier comedy channel RawDog Radio.

During the weekdays, you can catch him performing at the best clubs in the city, including Stand Up New York, New York Comedy Club, and Caroline’s. On the weekends, he tours the East Coast and Midwest as part of his “NYC Comedy Invades” series that features him and his funny friends. His credits include New York Comedy Festival, Bridgeton Comedy Festival, NowThis News. Visit BretRaybould.com to learn more about the fella.